A voyage of discovery through the south of Morocco

High mountains, gentle dunes and a clear starry sky await you in southern Morocco. The southern region of Morocco, which is best explored from Marrakech, with the Atlas Mountains in the north and the eastern border to Algeria is the right place to experience an exciting culture and the loneliness of the desert. The exciting combination of vibrant metropolises, historical traditions and spectacular nature makes Morocco’s south a unique experience.

To the adventures in South Morocco 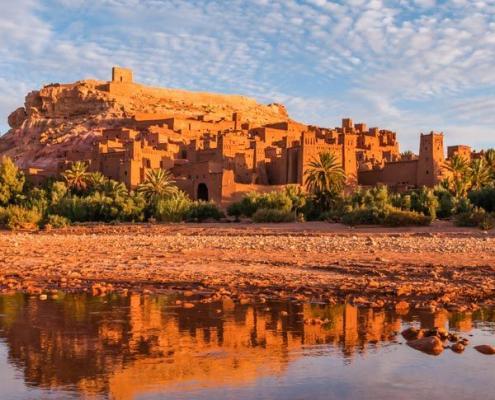 The former capital Marrakesh is an excellent place to immerse yourself in the Moroccan way of life. Authentic riads, noisy markets and Moroccan hospitality will inspire you from day one. Enjoy bargaining at the merchants’ stalls, the traditional mint tea in a street café and the breathtaking architecture full of mosaics and carvings. The city is the ideal starting point to go on a tour through the southern region of Morocco.

Ouarzazate – “The Gateway to the South of Morocco”

In the panorama of the mountains, the road leads past picturesque villages to Ouarzazate, the famous film metropolis of Morocco. International film studios appreciate the spectacular desert landscape around the town as a location for television and cinema productions. Not only classics such as “Lawrence of Arabia” or the German film “The Jesus Video” were produced here, but also parts of the successful series “Game of Thrones”. 30 kilometres northwest lies Ait Ben Haddou, a pretty village consisting of red clay buildings and a UNESCO World Heritage Site. The nested construction reminds of a fortress. This construction method is called Kasbah in Morocco. You can also get a taste of Hollywood air here, as the village served as the backdrop for the film “Gladiator“. From numerous platforms and terraces you have a first-class view and the special village itself invites you to discover and marvel.

In the footsteps of the nomads 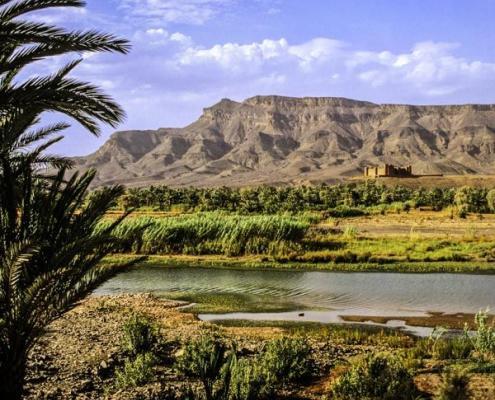 View of the Draa valley

The beauty of the desert landscape inevitably fascinates every visitor. In addition to the immense nature, the stories and legends about desert caravans and oases are also fascinating. The oasis town of Zagora, formerly a caravan station, is today the centre of the Draa Valley. Through this valley flows – at least theoretically – the Wadi Draa to the former caravan village Mhamid. However, the riverbed is regularly dried up. The valley is the ideal starting point for tours into the sand dunes, which in this part of the Moroccan Sahara are only little developed for tourism. Camels are your means of transport and at night desert tents are set up as camps, according to the Berber tradition. If you prefer a more modern way, you can take a jeep across the sand dunes.

Tamegroute – A place of pilgrimage and centre of learning

In the valley lies Tamegroute, the former centre of learning and famous for its traditional green ceramics. The Koranic school there once had one of the richest libraries in North Africa. The collection of thousands of manuscripts can still be visited and attracts many visitors and pilgrims every year. The collection is only part of the great history of Morocco. The small place Merzouga, further east at the Algerian border, is perfectly prepared for adventurous desert visitors. Here, small desert hotels await you, equipped with pools for cooling off on hot days and a wide range of experiences, from a classic desert tour to one of the nomad camps to fast-paced quad tours to sandboarding from the summit of the 150 m high sand dune Erg Chebbi.

Our adventures about South Morocco

Find your next adventure and experience a world from 1001 Nights in Morocco’s South!