Morocco’s other coast – holiday and culture at the Mediterranean Sea

The famous holiday destinations on the Atlantic coast of Morocco sometimes make the part of the country that lies on the Mediterranean Sea fall into oblivion. A mistake, because on the Mediterranean coast in northern Morocco, dreamlike landscapes, varied leisure activities and the fusion of North African and Mediterranean culture are waiting to be discovered by you.

To the adventures at the Mediterranean Sea 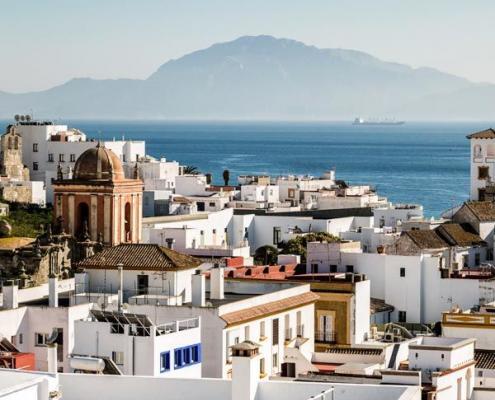 View over the harbour of Tarifa to Morocco

On Morocco’s Mediterranean coast, which is 430 kilometres long, there are several picturesque places that invite you to bathe, swim and relax. Saidia, for example, is the most important and most visited seaside resort after Agadir. The region at the Mediterranean coast convinces above all by its sunny climate, the pleasant water temperature and the numerous bays and lagoons of the beach sections. Some of them are a little more difficult to reach, which makes them quiet oases away from the tourist crowds. Off the Mediterranean coast of Morocco, there are several coral reefs worth seeing, which can be explored while diving or snorkeling. The fine sandy beach and the particularly clear water make the dream scenery even more worth seeing. After a day in the sun, small fishing villages invite you to an authentic Moroccan dinner. The menu naturally includes freshly caught fish, traditionally prepared.

The area at the northern tip of Morocco is also known for being separated from the Spanish mainland only by the Strait of Gibraltar, which is only 14 km wide at its narrowest point. From Spanish Tarifa, the southernmost city of the European mainland, the Moroccan Mediterranean coast can be easily seen with the naked eye.

Lively cities on the Mediterranean coast 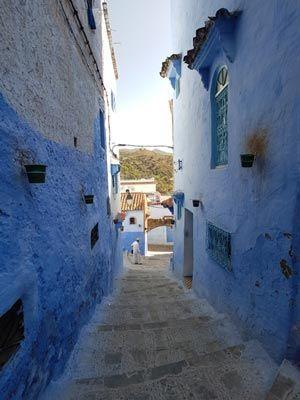 On the Moroccan Mediterranean coast, not only lonely beaches and a variety of water sports await you, but also several towns worth seeing, where you can immerse yourself in the colorful hustle and bustle of northern Moroccan city life. The largest of them is Tangier with almost one million inhabitants. The history of the city stretches from the ancient Romans to the Portuguese in the 15th century to the present cityscape, which is still marked by European, Jewish and Muslim culture. The market stalls in the old medina are the best place to get to know the country and its people. The two smaller towns in the region are Al Hoceima, which is great for a beach holiday, and Chefchaouen, located in the foothills of the Rif mountains. The latter was considered a Holy City and remained closed to visitors for centuries, never losing its original medieval character full of white and blue houses.

Chefchauen – the blue pearl of the Rif mountains

Today the city is a popular destination for tourists and inspires above all by the traditional kitchen. Vegetarians and vegans also get their money’s worth with the mixture of Moroccan and Mediterranean dishes. For hikers and nature lovers, the nearby Talassemtane National Park, protected by UNESCO, offers a unique natural paradise. If you are lucky, you may see limestone mountains, cliffs, gorges and caves, bearded vultures and many other unique bird species.

A piece of Europe in North Africa

Where Morocco and Spain are only a few kilometres apart, there are geographical and historical peculiarities. Two Spanish cities, Ceuta and Melilla, are on African soil, as is part of the EU. These areas were preserved even after Moroccan independence in 1956. Not far from the Spanish border fence is the Moroccan city of Tetouan. Here the Rif Mountains have their northern foothills and the narrow streets of the old town as well as a worth seeing archaeological museum attract numerous visitors every year. The region on the Mediterranean coast is a very special part of Morocco and should not be missed on any round trip through the country.

Our adventures about Morocco’s Mediterranean coast

Find your next adventure and relax on the most beautiful beaches in Morocco!

No products found which match your selection.